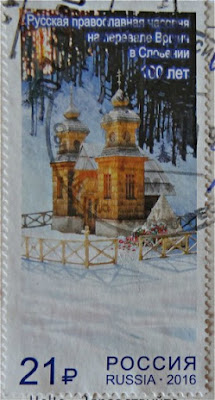 
Russia and Slovenia issued this stamp to commemorate the 100th anniversary of the Russian Chapel below Vrsic. In 1915, a Prisoner of War camp was opened near the present borders of Slovenia, Austria and Italy. Most of the POWs were Russian soldiers who were given the job of building a road across the Vrsic Pass. On March 12, 1916 a group of prisoners were clearing the road of snow when an avalanche killed more than 500 people. Local Slovenians buried the dead in a mass grave and to honour them, the remaining prisoners built a small wooden chapel at the site.