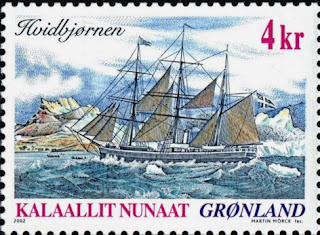 
The Hvidbjornen was crushed by an iceberg after being trapped in some cliffs near Nunarsuit, an island in Greenland, in 1895. Greenland is the world's largest island (that is not a continent) and has only around 57,000 inhabitants. Denmark has sovereignty over the country and Greenlandic and Danish are its official languages. Kalaallit is Greenlandic for the name of the native Inuit people.

2007,  US - Navajo Jewelry
illustrated by Lou Nolan from a painting by Peter Furst


A silver and turquoise squash blossom necklace with Naja pendant. The Naja is an inverted crescent believed to be based on colonial Spanish bridle designs that were in turn based on Moorish crescent design. For the Navajo it is decorative rather than spiritual yet is still held in high esteem. The squash blossom is based on a Spanish-Mexican ornament that was a stylized pomegranate blossom. The necklace shown on this stamp was made in the 1940s.

for the letter J - jewellery (or, if you prefer, 'jewelry')

Email ThisBlogThis!Share to TwitterShare to FacebookShare to Pinterest
Labels: crafts, US 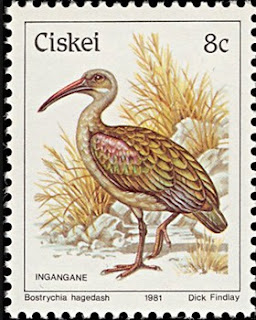 
David Findlay (b 1928) is a prolific ornithological artist and has produced over 30 stamps of birds of Ciskei from 1981-1991. This ibis lives in Sub Saharan Africa and has an extremely loud, and boisterous call - the name Ingangane is onomatopoeic in Zulu, resembling its cry. In English it is known as hadeda ibis.

for the letter I - ibis, ingangane 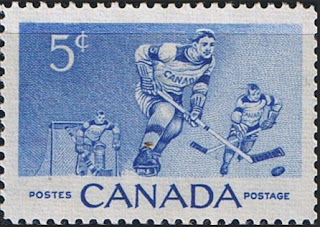 
Issued in 1956 to honour the skill of Canada's amateur hockey players and the prestige they earned for international competition.

In memory of the Humboldt Junior Hockey Team who were involved in a bus crash which killed 16 and injured 14 as they were en route to a semi-final playoff game in Saskatchewan.

for the letter H - Hockey, Humboldt 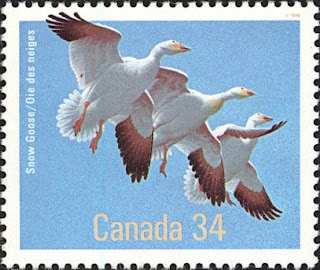 
This stamp, with a painting of the Snow Goose in flight by Jean-Luc Grondin, was issued in 1986 during the year Canada hosted the XIX Ornithological Congress. Co-incidentally, the Congress will be again be hosted by Canada this year, for only the second time since 1884. The Snow Goose breeds in the high Arctic and migrate south for the winter in flocks of thousands.

for the letter G - goose