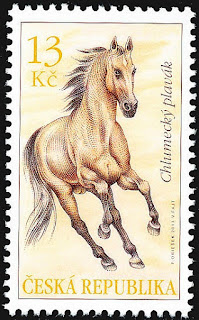 
The Chumlec horses from the Kinsky stud farm are among the best horses bred in the Czech Republic. They are admired for their extremely glossy, almost metallic, golden colour as much as for their stamina, athleticism and good character.  During the Prussian War, the Kinsky's, a member of the Bohemian nobility, were ordered to develop their stud farm and breed good quality horses for the elite cavalry. Apart from military and police, they are best suited for dressage, steeplechases, show jumping, fox hunting and polo. 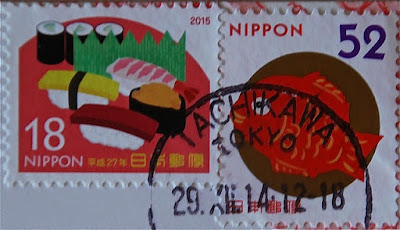 Issued in October of 2014 for New Year, this temporary stamp (left) makes up the difference of domestic rate and international postage for postcards. It is common in Japan to send postcards to arrive on New Year's Day. This is one of the two most popular cuisine (the other stamp in the set shows tempura). The 52 yen stamp is the regular rate and was issued for the "greetings" theme and shows a pagrus major (or, in Japanese,  madai) which is prized for its flavour and for its traditional use as a food of good fortune often served at New Year or for other festive occasions. 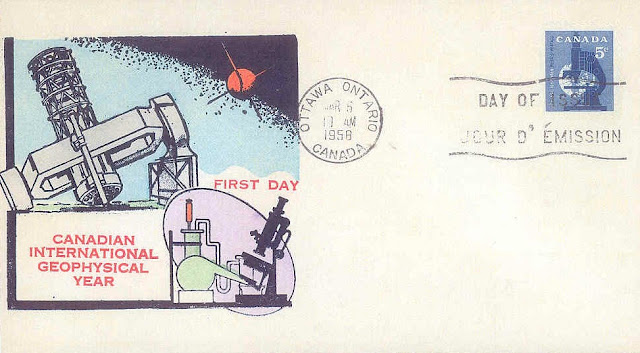 
The International Geophysical Year was an international scientific project that ran from July 1 - Dec 31, 1958 and had 67 nations participating. The focus was on studies of the universe in all parts of the world and encompassed eleven earth sciences, including meteorology, oceanography, seismology, solar activity, geomagnetism, cosmic rays, aurora, gravity and longitude and latitude determinations for precise mapping. Some of the legacies of the ICY lead to the creation of the Antarctic Treaty and the World Data System both of which encourage free exchange of scientific information across international borders. 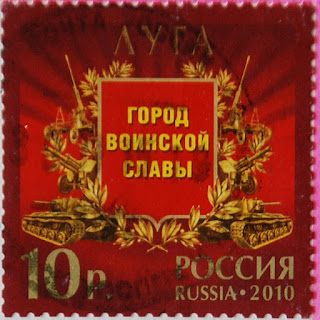 
Each of the five stamps in this set is exactly the same, save for the name of the city written in gold foil on the top. In this case, it is Luga. The other cities are: Malgobek, [Y]Elnya, [Y]Elets, and Voronezh. The stamps are square, measuring 37mm x 37mm and valued at 10 rubles. Luga was given the status of "City of Military Glory" by Vladimir Putin in 2008 for "courage, endurance, and mass heroism, exhibited by the defenders of the city in the struggle for freedom and independence of the Motherland". In 2010, Luga had a population of around 38,600. It's located 140km south of St Petersburg. During WWII, seven regular militia and irregular divisions in the Luga area halted the advance of the German army and delayed the Siege of Leningrad by over one month. The German occupation of Luga lasted from August 1941-February 1944.

for the colour Red 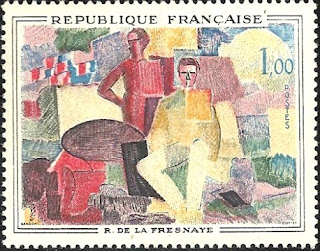 
14 July, the French National Day, is commonly called Bastille Day in English. This painting by cubist artist Roger de la Fresnaye (1885-1925) was done in 1914. The de la Fresnayes were an aristocratic family and Roger studied at several art academies including the École des Beaux-Arts in Paris. He contracted tuberculosis in WWI and his health rapidly declined afterwards. He painted infrequently from 1918 until his death in 1925.