The first samovar factory was founded in Tula by gunmakers moving in a new direction, in 1778. By the mid 1800s, the town had 70 samovar manufacturers. The peak period for production was in the 1880s and Tula became synonymous with samovars.

for the letter U - USSR 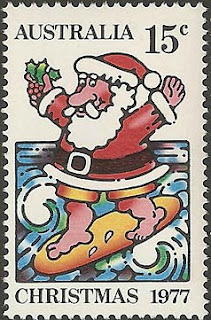 
This Surfing Santa stamp was controversial when it was issued in 1977. Apparently, Santa could be too irreverent. This was only the second year a secular Christmas stamp had been issued, and the following year, AusPost returned to issuing only religious themed stamps. In 2007, it was reissued for a 50th year celebration of Christmas stamps.
Merry Christmas to one and all!
For Christmas 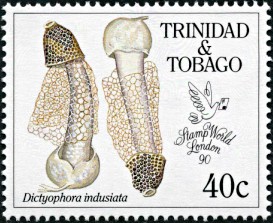 
Trinidad and Tobago are the most southerly islands in the Caribbean. They became independent nations in 1962 after being ruled by the Spanish and British - and in Tobago's case, also French and Dutch. This stamp, showing the more commonly called bamboo fungus, was issued for the World Stamp Exhibition.

for the letter T - Trinidad and Tobago 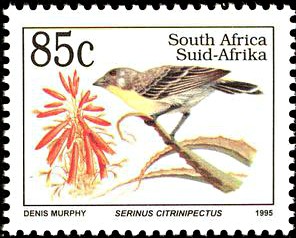 
The Serinus citrinipectus is more commonly known as a lemon breasted canary. They are completely dependent on the lala palm where they breed and build their nests. These palms are increasingly being used for crafts and curios (the fruit) and even beer or wine (the sap) and the fronds for thatching and weaving. Successful breeding of these birds rarely happens outside of the protected areas.

for the letter S - South Africa 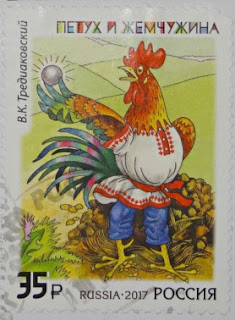 The Rooster and the Pearl is a Russian fable by V.K. Trediakovsky. It also seems to be accredited to other authors, including Aesop.
"While pecking in a compost mound,
A Rooster came upon a Pearl
And cried, amazed 'What's this I found?!
It has no use in all the world'
What fools are men to treasure such
Tough grains that no one can digest
Now, barley does not shine as much,
But fills the belly. Which is best?"

Thus, often in the world of man, a fools deems useless what he does not understand

for the letter R: Russia, rooster