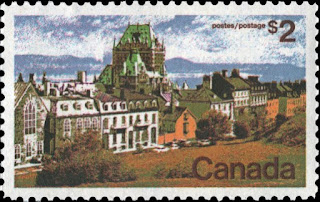 
Quebec City is one of the oldest cities in North America and has the only remaining fortified wall north of Mexico. Vieux Québec is a Unesco World Heritage Site. One of its most prominent buildings, shown here on the stamp, is the grand railway hotel, the Chateau Frontenac. Quebec has always been a capital city, from its earliest settlement in New France to Lower Canada to the Province of Quebec. 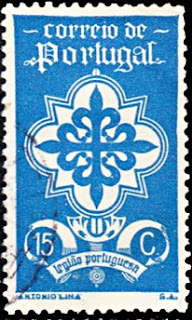 Showing the emblem of the Portuguese Legion. 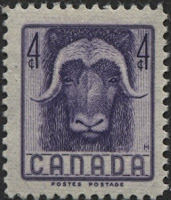 
The Musk Ox (Ovibos moschatus) lives in the tundra of the Arctic. The name comes from the musky odour of the males during the rutting season. In winter, they live on roots, lichen and mosses and during the summer  months they feast on Arctic flowers and grasses. Its long, shaggy coat makes it appear larger than they really are. They are smaller than bison and about half the weight (4'-5', 400-900 lbs).

for the letter O - ox, ovibos 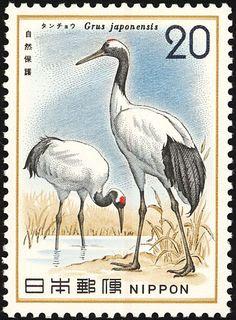 The Red crowned crane, also known as the Japanese crane, is among the largest of the cranes and can reach a height of 5' 2" (150-158 cm) with a wingspan of between 7' to 8' (220-250 cm). Hokkaido is a special breeding area and these cranes migrate less than 100 miles for the winter. Cranes are said to grant favours in return for acts of sacrifice. It is also the logo for Japan Air Lines. The name Japan is mostly used by for foreign branding, while Nippon is the name used since the seventh century. The kanji characters mean 'origin of the sun'.  In the Tang dynasty, the earliest record of the use of Nippon comes from a message brought to China by a delegation from Japan from the "Emperor of the land where the sun rises to the Emperor of the land where the sun sets" which refers to the fact that Japan lies east of China.

for the letter N - Nippon, nature