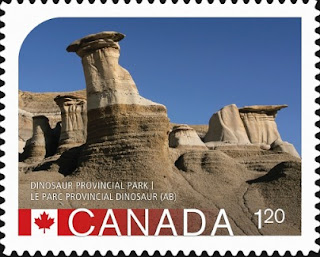 
These Hoodoos are in the badlands of Alberta. They stand about one to three metres high and are weathered stone columns with sandstone caprocks. The problem with this stamp is that the Hoodoos are not in Dinosaur Provincial Park, but are actually near Drumheller, about 165 kms to the northwest. The stamp was issued on Friday, July 3rd and by Tuesday, July 7th were recalled. All the stamps in the booklet, including the other two in the series, Waterton National Park and Wood Buffalo National Park, were destroyed. By late August the set was re-released with the correct Dinosaur Provincial Park badlands photo. 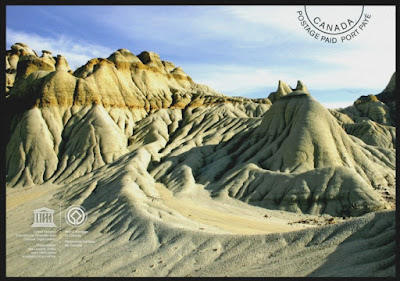 (seen here on this PrePaid Postcard) 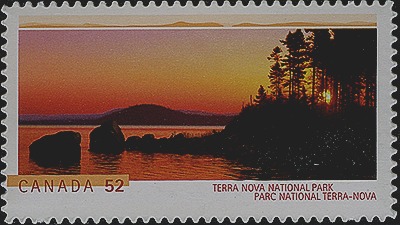 
Showing a sunrise over Alexander Bay, this stamp celebrates the 50th anniversary of Terra Nova National Park, the first national park in Newfoundland. The park is 400 square kilometres of rugged terrain that is part of the Appalachian Mountain System that extends from Newfoundland to Alabama. 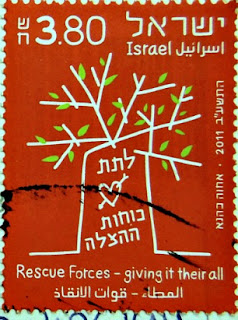 
This stamp celebrates the men and women of Israel's rescue forces who devote their time and energy to training and preparation in anticipation of an emergency situation - a natural disaster, accident, acts of terrorism or war - where their services might be needed. Members of the various rescue forces are responsible for evacuating the injured from the scene of an event, providing life saving treatment and speedy transfer to hospital as well as protecting the public from law breakers and terrorists. Many volunteers are active in each of the rescue organizations. 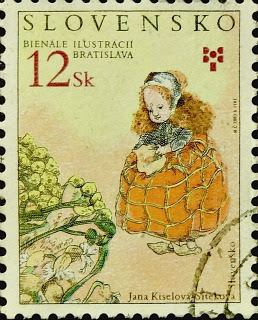 
The Biennial of Illustrations Bratislava (BIB) is an international competitive exhibition of illustrations for children's books.  Jana Kiselová-Siteková 'creates ethereal and fragile illustrations using fine colours, unusual techniques and microdrawings'. This stamps shows Hans Christian Anderson's Thumbelina (Palculienka in Slovak) which won a Golden Apple award for the BIB in 2001.