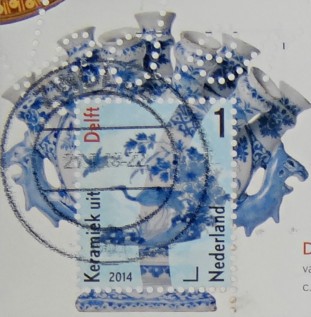 
This 1700s vase was featured as part of a 5 series of stamps for Mooi Nederland (Beautiful Netherlands).
Delftware is a tin-glazed earthenware (also called faience and majolica). The opaque glaze is added to the fired piece and then fired a second time. The potting industry in Delft began after the brewers left the town with several abandoned buildings and polluted canal water. Around the same time war in China put an end to the making of their blue and white porcelain and Delft deftly picked up the trade.

for the letter D - Delft