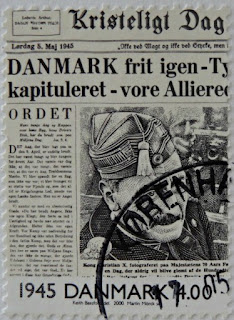 
Showing the front page of the newspaper Kristeligt Dagsblad (Christian Daily Newspaper) from 5th of May, 1945 commemorating the liberation of Denmark. The man in the photo is Kong Christian X. This stamp was part of the Twentieth Century series issued for the Millennium. The Kristeligt Dagsblad was originally an evangelical newspaper when it was established in 1896, publishing articles on morality and religious and cultural topics, and no sports. King Christian X was King of Denmark from 1912 - 1947, and symbolized Denmark's resistance to the German occupiers during WWII. Occupation began in 1940 and after a speech in 1943 against the occupation forces he was imprisoned until the end of the war. He was known as the Riding King as he was often seen riding on horseback through the streets of Copenhagen to show he had not abandoned his claim to sovereignty.  Here you can see a video of him with his horse and his family.

for the letter K - King (Kong, in Danish), Kristeligt, København