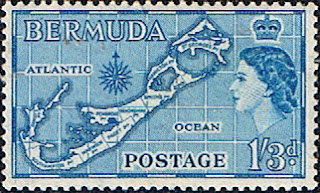 
Bermuda lies in the North Atlantic about 1034 miles northeast of Miami, Florida and 768 miles south Sable Island, Nova Scotia. It is actually 181 islands, with a total land mass of 20 square miles. Only eight of the islands are populated. It was discovered in 1503  by the Spanish explorer, Juan de Bermudez. But it wasn't until 1609 when one of a flotilla of British ships was shipwrecked on its way to the colonies in Virginia that the island had any settlement. It is believed that Shakespeare's The Tempest was based on the account of that shipwreck.