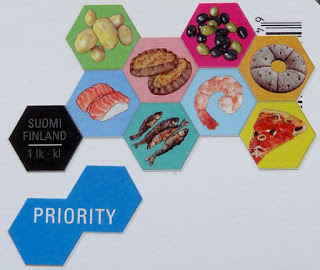 designed by Sami Saramäki to celebrate 'changes in everyday life', this particular set shows culinary culture and how eating habits have changed over the years to include fast foods (pizza) and imported foods (olives) to ethnic foods (sushi) along with the staples of potatoes, breads and fish and shrimp.  This is part of a series of stamps begun in 2013 for Finland's 100th anniversary of independence in 2017.