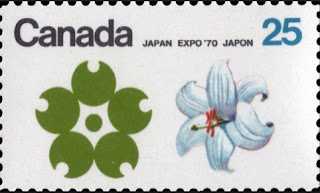 
Expo 70, held in Osaka Japan, was Asia's first World Exposition. Canada had four pavilions - Governments of Canada, British Columbia, Quebec, Ontario. This stamp shows the white garden lily which was the floral emblem of Quebec until 1999 when it was replaced with an iris. The other stamps in this set showed the trillium for Ontario and the dogwood for British Columbia. The Canada stamp had the Expo 67 logo. The Expo 70 logo was designed by Yusaku Kamekura. It is a stylized cherry blossom with five petals representing the five continents. The circle in the centre represents Japan.

for the letter X - EXPO