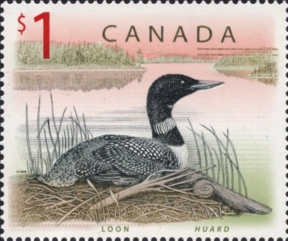 
The Common Loon is characterized by its large size and sharply pointed bill (unlike those of ducks and geese). Their legs are positioned far back on their bodies which makes them strong propellers in the water but also makes it difficult for walking on land. They spend almost all of their time on water, except to nest and even then, the nests are very close to water. Usually two eggs are laid in early June with an incubation period of around four weeks.

for the letter L - loon