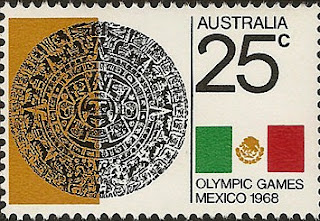 
112 countries participated in 18 sports at the 1968 Summer Games in Mexico City from October 12-27, 1968. This stamp features the Mexican flag on the right and an Aztec calendar stone on the left. As an extra X, the first Aztec calendar was called the Xiuhpohualli, the counting of years (18 months of 20 days, plus 5 'unlucky' days when disasters may happen). There is also a second calendar on the stone for the days - each week had 13 days. It was carved from solidified lava in the 15th C, but somehow was lost for 300 years, later found buried in the central square of Mexico City.

for the letter X - Mexico, Xiuhpohualli