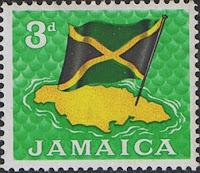 
Jamaica is the fourth largest island country in the Caribbean. It was claimed for Spain in 1494 by Christopher Columbus, though the Awarak people had been living there since about 4000-1000 BC. The British claimed it for themselves in 1655. Independence was granted in 1962 and their new flag was adopted. It is the only country flag that does not feature any red, white, or blue. The gold saltire represents the natural wealth, and beauty of sunshine. The green triangles are for natural resources and hope; the black triangles for strength and creativity of the people.The original interpretation was that there are hardships (black) but the land is lush (green) and the sun shineth (gold). Jamaica was also the first British colonial territory to establish a postal service, in 1688.

for the letter J - Jamaica