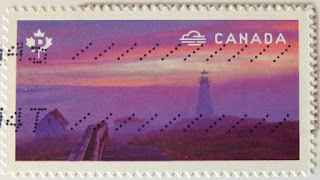 Cape Spear is on the Avalon Peninsula, Newfoundland (near St John's) and is the easternmost point of North America. The lighthouse is the oldest surviving lighthouse in Newfoundland and Labrador. It was built in 1836, with a new tower built in 1955 using the active light from the original tower. Generations of the Cantwell family of lightkeepers lived at Cape Spear for 150 years, from 1847 to 1997.

for lighthouses and/or windmills
Posted by violet s at 23.4.17