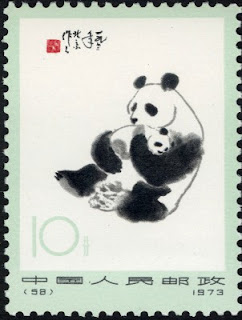 
Pandas are native to south central China, primarily in Sichuan province. It is thought that there are fewer than 2,000 living in the wild. Although it's classified as a carnivore and could eat rodents, fish, eggs or insects if it wanted to, giant pandas prefer to eat only bamboo. And they can eat up to 28lbs (12kg) of it in a 12 hour period. They are solitary creatures and their only social encounter is during the very brief mating season. The father has no family ties, leaving the mother to raise her cub alone. A baby panda weighs only 3 or 4 ounces when born which is about 1/800th of its mother's weight. By age one, the cub will weigh around 100lbs (45kgs)
for Eastern Hemisphere