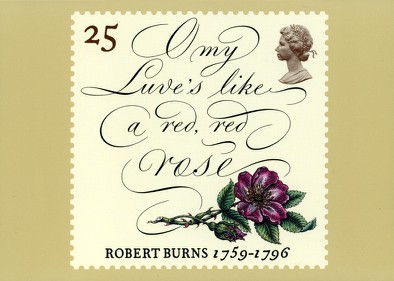 A Red, Red Rose is an amalgam of several traditional ballads that Burns reworked describing a love that is both fresh and long lasting. To this day it remains as a testament to the pain of a lover's parting. This set of four stamps commemorating the Immortal Bard was issued on his birthday on the 200th anniversary year of his death. The others in the series each have a line of verse in different calligraphy with an accompanying illustration.

O my Luve's like a red, red rose
That's newly sprung in June
My luve's like  melodie
That's sweetly play'd in tune

As fair art thou, my bonnie lass,
O deep in luve am I;
And I will luve thee still, my dear
Till all the seas gang dry.

Till all the seas gang dry, my dear,
And the rock melt wi' the sun;
And I will luve thee still, my dear
While the sands o' life shall run.