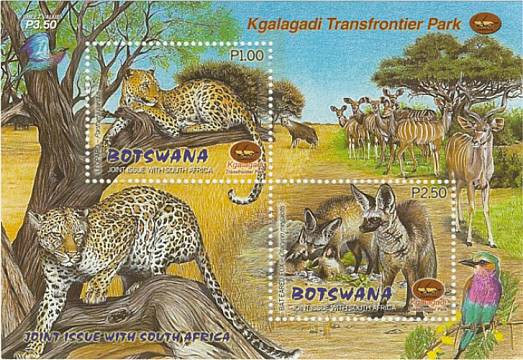 
The two stamps on this souvenir sheet are of a leopard and a bat eared fox. Though leopards are the most common cat in Botswana, they are also the most elusive. The bat eared fox is also known as the cape fox and is the only known true fox in southern Africa. It is also a prey of the leopard. Off on the upper right are some kudus, a type of antelope known for its twisting horns.  Kgalagadi Transfrontier Park was created in 1999 with South Africa. It is a 37,000 sq km protected area that borders both countries with three quarters of the area within Botswana.  The animals are free to roam their ancient migration routes without encountering any fences.