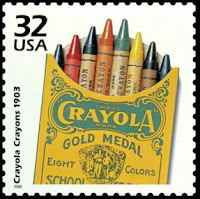 1998, US,  Celebrate the Century series
illustrated by Richard Waldrep


Binney & Smith developed its wax crayons in 1903 which were branded as Crayola - a name derived from 'craie', French for chalk and 'ola' from oily, or oleaginous, continuing with the popularity at the time of commercial brand names ending with 'ola' (Mazola, Victrola, granola, pianola). Crayola is sold in over 80 countries, though most of the crayons are made in the US. Crayons are sticks of coloured wax, chalk and charcoal. This stamp features the Gold Medal box - the award was won in for their dustless chalk at the 1904 World's Fair. The first box of No 8 crayons had eight colours. You can find a comprehensive list of all the colours ever produced by Crayola here.

Email ThisBlogThis!Share to TwitterShare to FacebookShare to Pinterest
Labels: advertising, US