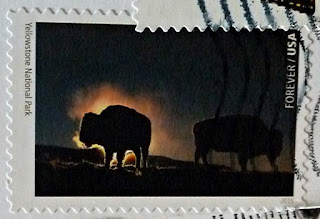 
Photographer Art Wolfe described this shot as "perfectly backlit bison standing on a small rise in Yellowstone's Lamar Valley". It was taken at dawn on a cold winter's night in February, 2000.  This was the last of the 16 Forever stamps issued this year in recognition of the 100th anniversary of the National Parks Service. Yellowstone became a National Park in 1872 as the first national park in the US (it is also considered as possibly the first in the world) and previous to 1916 was managed by the US Army. The free ranging bison herd is the oldest and largest public bison herd in the States. Mostly in Wyoming, the park (and, presumably, the bison) also extends into Montana and Idaho.

for fireworks, or night views

Email ThisBlogThis!Share to TwitterShare to FacebookShare to Pinterest
Labels: animals, night views, US