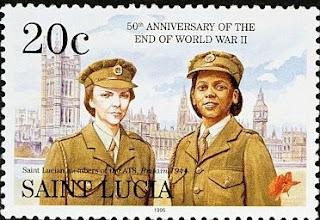 
Commemorating the Auxiliary Territorial Service, the women's branch of the British Army during the Second World War from 1938 until 1949 when it became the Women's Royal Army Corps.  All women who were in the army were in the ATS with the exception of nurses and other medical officers. They were attached to the Territorial Army and received two thirds the pay of the male soldiers. By 1941 there were 65,000 women in the ATS from the ages of 17-50.

for war and peace