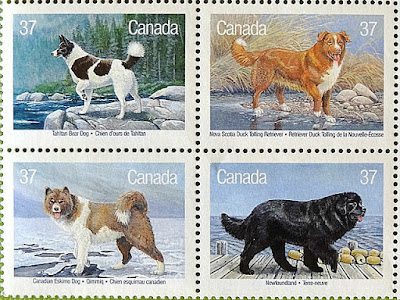 
The Canadian Kennel Club celebrated its 100th anniversary in 1988, and in celebration, Canada Post commissioned artist and dog breeder Mia Lane to paint four dog breeds that are native to Canada.  Each dog is shown in what would be their natural setting.

Top left is a Tahltan Bear Dog, a breed that is believed to now be extinct.  The Tahltan Indians of northwestern British Columbia used these small dogs - about the size of a fox - to locate game, then with their high pitched, staccato barking and unpredictable darting to harass the target until the hunters arrived with their bows and arrows. Their smaller size made it practical to carry them in packs and to conserve their energy for the hunt. Apart from their peculiar 'yodel', they also had a distinct tail that was often described as looking like a shaving brush or whisk.

Top right is a Nova Scotia Duck Tolling Retriever, the smallest of the retriever breed. They are high energy dogs who got their name from their ability to lure waterfowl to within gunshot range and then retrieving the downed bird.  Originating in southwestern Nova Scotia around the beginning of the 19th century, it appears to have some genes of spaniel, retriever, pointer-setter type dogs, rabbit hounds and possibly also collies as they eventually became herders as well as hunters and family pets.  In 1995, these Tollers became the provincial dog of Nova Scotia.

Bottom right is the Newfoundland, originally bred as a working dog for the fishermen of Newfoundland. they excel at water rescue and lifesaving because of their muscular build, thick double coat, webbed paws and innate swimming ability.  Many harbour boat tours in St John's have a Newfoundland on board partly for local charm, but mostly for passenger safety.  St Bernard dogs are descendants of Newfoundlands since the two were introduced in the 18th century when the St Bernards were threatened by a distemper epidemic.

Bottom left is a Canadian Eskimo Dog, also known as Qimmiq (an Inuit word meaning simply 'dog') is one of the world's oldest breeds, having been in the Arctic for 4,000 years. It is a distinct breed known for its ability to pull heavy sleds, resist harsh climate and thrive on a high protein and fat diet of fish and frozen meat.  They have declined drastically in number, but are still used for sled dog teams for tourists and (by law) for commercial polar bear hunting in the Northwest territories and Nunavut. This is a good safety measure as the working dogs can sense when a polar bear is around, whereas a noisy snowmobile would mask any signs of a nearby bear. When the new territory of Nunavut was created in 2000, the Qimmiq was adopted as their animal symbol.

Next week I will be on holidays, but the link will be up as usual. It is a free choice theme, so everyone can join in with whatever takes your fancy.  If anyone has any particular themes, or ideas for future posts, please leave a message in the comments or by email (maplesaunt@gmail.com)