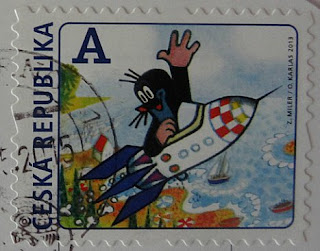 Krtek, or Mole, is a cartoon character originally created by Zdenek Miler in 1956. Miler wanted his mole to be understood all over the world, so the cartoons have a distinct lack of dialogue, using instead non-figurative exclamations to express Moles's feelings and perceptions. Miler's own daughters did the voice-overs. The Mole and the Rocket was a 9 minute film made in 1965 where Mole crash lands on a deserted sea island and makes friends with a crab who helps him find the lost parts of his rocket. There have been around 50 of these short (approximately 5 minute) cartoons made with the last one in 2002. Miler died in 2011 at age 91.

for cartoons, or children's drawings
Posted by violet s at 21.6.15