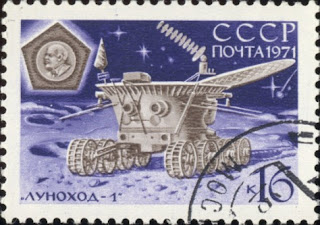 
The Lunokhod - "Moonwalker" - was a robotic lunar rover, and this stamp shows the Lunokhod 1, the first remote controlled rover which landed on the moon in 1970. It has a rather cartoonish look here, which I love.  On the lid is a solar cell for powering the batteries. It landed on Sea of Rains and travelled 6.5 miles during its 322 day sojourn. No one knew exactly where it was when the final signals failed, but in 2010 A NASA Lunar Reconnaissance Orbiter found it and found that the reflectors are still useful.

for stars, moon or planets