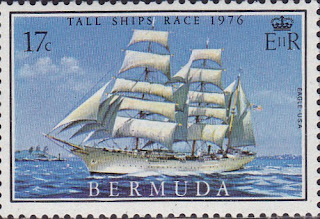 The Tall Ships Race that took place in 1976 during the American Bicentennial was from Bermuda to Rhode Island. The EAGLE was the only US ship in Class A. Originally named Horst Wessel, this 1936 built barque was renamed the Eagle when it was transferred from Germany to the US in 1945. It is currently used as a training vessel for the US Coast Guard.

Starting in August, we will have an alphabet theme for each week. You are invited to share any stamps from a country beginning with each week's designated letter, or showing something beginning with that letter. Any language may be used. So, 'N' may feature 'Netherlands', something orange ('naranja'), 'nautical',  an 'N tariff' on a stamp from Belarus, or even 'new' - as in a new issue, or simply new to your collection.