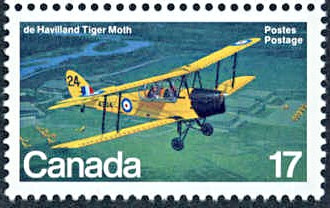 1981, Canada,  Aircraft
based on a painting by Robert Bradford


Between 1937 and 1942, 1500 Tiger Moths were built by de Havilland. The RCAF first used this model for elementary pilot training in 1938 and thousands of pilots  would receive training during during WWII. Many remembered this plane affectionately as a pleasant aircraft to fly. This stamp shows a DH-82C in Second World War trainer-yellow flying over Prince Albert, Saskatchewan.