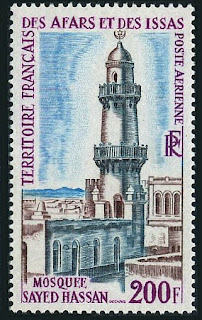 
Between 1967 and 1977 what is now known as Djibouti was called The French Territory of Afars and Issas. It lies on the Gulf of Aden near the gateway to the Suez Canal and borders Eritrea, Ethiopia and Somalia. The Mosque was built in 1906 by Hadji Hamoudi, an Arab businessman, and can hold up to 1,000 worshipers. It is considered one of the most iconic structures of Djibouti City.