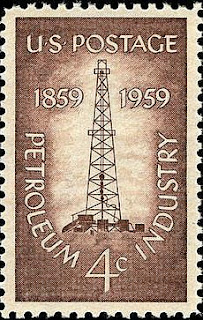 Designed by artist Robert Foster with a modern oil derrick to celebrate the 100th anniversary of the first commercial oil well drilled in the US (the Drake's Well). Despite intense lobbying by oil historians and the petroleum industry, this is the only commemorative oil stamp USPS has produced. In 1959, at the stamp's unveiling, the Postmaster General, Arthur Summerfield declared "The American people have great reason to be indebted to this industry. It has supplied most of the power that has made the American standard of living possible." Attitudes to the oil industry have changed greatly since those heady days.

for technology and industry

Email ThisBlogThis!Share to TwitterShare to FacebookShare to Pinterest
Labels: commemorative, engraved, industry, US