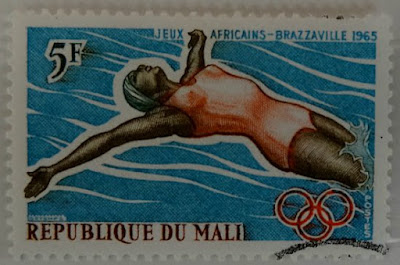 1965, Mali for the 1st All Africa Games held in Brazzaville Congo


The All Africa Games were held from July 18 - July 25th, 1965 40 years after Pierre de Coubertin originally proposed the idea. In 1925, the Games to be held in Algeria never materialized. In 1929, the Games in Egypt were cancelled weeks before they were scheduled to begin by the colonial powers who feared they might "unite Africans" and help them break free from colonial rule.
The IOC granted the Games official recognition as a continental multi-sport event (just as the Asian Games and the Pan American Games) and were to be held the year before the Olympics. The 2nd Games were awarded to Mali in 1969, but these were cancelled due to a military coup. Nigeria stepped up to host in 1971, but were delayed until 1973 due to the Biafran War. The Games were plagued by further setbacks and it wouldn't be until the 5th Games in 1991 that they would be held for the first time on the four year cycle. This year the Games will again be held in Brazzaville, Congo, from September 4 - 19.
Mali won a silver in soccer in 1965 and two golds in unidentified events.

next week, as requested by Bob Scotney, we have a butterflies theme